Bokaro: The Bokaro-Ramgarh National Highway-320 will be part of the Bharatmala Project in the coming days. Under the project, the present road will be constructed from Raipur of Chhattisgarh to Dhanbad via Bokaro developing it as an economic corridor. The route will be changed at some places. The present two-lane road from Jainamod to Ramgarh will be converted into a fourlane.

This road will pass through Ormanjhi, the existing road of the state government, after Gola. With it, there will be a fourlane road from Bokaro to Ranchi. And most importantly the distance between Bokaro and Ranchi will be cut-short to about 30 kilometres. Major industrial units will be benefited from this road becoming fourlane.

Deputy commissioner, Bokaro, Rajesh Kumar Singh said the process of land acquisition in Bokaro will start soon. Under this project widening of about 23 km of road will be done in the district. The land will be acquired under three blocks of the district including Bandhdih, Kalyanpur, Baradih of Jaridih Block, Bahadurpur, Kamlapur and Dantu of Kasmar Block and Poda, Darid, Lukai, Takaha, Sadmakala, Chandrapura, Saralakhurd of Petarwar Block.

“A request in this regard has been given by National Highway Authourity of India (NHAI) to Bokaro administration and other districts where land is to be acquired. The process of land acquisition will start soon”.  Sources said that there is a plan to connect major industrial cities under Bharatmala project,” said Vijay Kumar Gupta, additional collector, Bokaro.

Many major industrial cities will be connected in some way or another Raipur-Dhanbad Economic Corridor. Industrial cities of Ranchi, Bokaro, Dhanbad of Jharkhand along with Jamshedpur, Odisha and Chhattisgarh will also be part of this road. This will speed up the movement of vehicles and in a short time the goods produced from industries will be able to move from one place to another.

In Jharkhand, two interstate roads will be constructed under the Bharatmala project. For this, Ranchi-Sambalpur road and Dhanbad-Raipur road have been selected. However, a large portion of these roads have already been constructed. But under this project fourlaning will be done completely.

Bharatmala Project is a centrally-sponsored and funded Road and Highways project of the Government of India. The total investment for 83,677 km committed new highways is estimated at Rs 5.35 lakh crore, making it the single largest outlay for a government road construction scheme. Bharatmala Project will interconnect 550 District Headquarters through a minimum fourlane highway by raising the number of corridors to 50. 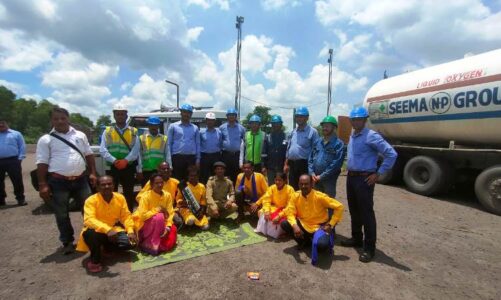